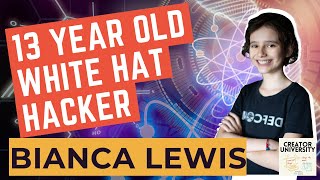 Michelle Sun, the founder of First Code Academy, interviews Bianca, a 13-year-old white-hat hacker and maker who is famously known as BiaSciLab.

Growing up, Bianca was an ordinary girl who liked playing with Barbie dolls and video games, fencing and singing. However, she has also been passionate about innovation and technology since she was in kindergarten, where her LED-lit dollhouse took first place in the school science fair. In 2018, she became famous as a hacker when she hacked the voting reporting system at DEFCON 26. This work was highlighted in the U.S. Congressional Hearing on Election Security.

She, and several other pre-teens, were not only able to hack into Florida's election website but was able to change election results in a matter of minutes where she successfully performed a SQL Injection on the mock election reporting systems set up in the r00tz asylum.At the age of 11, she was the youngest speaker at H.O.P.E. and has given talks and taught classes at many hacking and technology conferences including DEFCON in the Voting Village, Bio Hacking Village, r00tz Asylum kids con, Numerous Bsides and WOPR Summit.

BiaSciLab is also the Founder and CEO of Girls Who Hack, an organization focused on teaching girls the skills of hacking so that they can change the future. She recently started Secure Open Vote, her own end-to-end election system built on open-source standards.Michelle and Bianca speak about their journey in coding where she started with Scratch when she was in kindergarten into a hacker at the age of 13,  her experiences in the hacker competition at DEFCON 26, and what inspired her to create an open-source voting system.

She also spoke about how she started her organization “Girls Who Hack” which teaches hacking skills to young girls and her future plans on making a  more secure election system.

We hope you enjoy this episode - we were super inspired by Bianca, and she’s definitely off to be an expert hacker in the future. We can't wait to see what cool projects she will build.