The 15-Year-Old STEM Advocate and Innovator 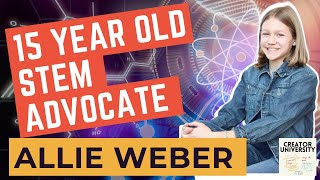 Allie was a host as a MythBuster on the Discovery Science Channel show, MythBusters Jr.She is mostly known as RobotMakerGirl as she is very passionate about inventing and building cool robots and machines.  As her father is an engineer, she grew an interest in building simple projects, from the age of four. At the age of six, she created a robot named “Robie the Robot” out of recycled items at her home in which she won her school science fair. From this, she became the inspiration to create  Robot Girl Lottie Doll and her robot, Busy Lizzie which was released to the market in 2014.

Furthermore, she holds one patent for her “Frost Stopper” gloves she designed as a fifth grader for the Spark Lab Invent-It Challenge in which she was the winner in the year 2016. Her second patent  Adding to her list of achievements, In 2017 Allie was listed in the “21 under 21” girls who are changing the world by Teen Vogue Magazine.

Allie was recognized by 3M and Discovery Education as one of the top 10 young scientists in the country as a finalist with her patent-pending Blow Dart Spirometer, in which she hopes to revolutionise the way people design medical equipment for children.Currently, hosts her own YouTube channel “Tech-nic-Allie Speaking” which is devoted to tech-toy reviews, and to show other kids her inventions to inspire them to build, make, and create.Michelle and Allie speak about how she first discovered her interest in STEAM, the current projects she is working on including the #hackapumkin​ challenge, her experiences on hosting and creating content for her YouTube channel, and being a member of STEAM Squad which is a group of some of the top Science Tech Engineer Arts Math teenage girls in the world. She also shared her experience of getting frostbite, which inspired her to build the patent Frost Stopper gloves.

We hope you enjoy this episode - we were super inspired by Allie, and she’s definitely off to be an innovator in the future. We can't wait to see what cool projects she will build.